Nearing the end now of my Complete Discworld Reread.

When I wrote my review for Going Postal, a major theme was how little was new in that novel – how it seemed in some ways like a second attempt at The Truth, with little bits taken from other installments to make it different.

Well, Making Money is basically the same as Going Postal, right down to some of the same set pieces and plot beats. It’s the same… but also not as good.

There’s a terrible sense of tiredness about the novel – of laziness. Pratchett even lampshades this in his acknowledgement, admitting that he’s going to be digging up very traditional British jokes. For example, within two pages, we have characters, in all seriousness, going through the motions of the “can you keep a secret? *looks from side to side and beckons the listener in* Well so can I!” joke. Really, Pterry? That’s a joke that we all know so well that it barely registers as a joke, rather than as a cringe-inducingly cliché bit of dialogue from a thousand terrible TV shows and films. [I’m sure the character delivers it very well, but I’m also sure he doesn’t deliver it as well as Nigel Hawthorne in Yes, Minister, so really, what’s the point?]. And at least that’s a quick one! Dear gods, that tortured skit in which characters are made to act out the old “otherwise sane character has a strange compulsion to carry out a sequence of bizarre and improbable actions whenever a trigger word is heard” routine. [probably best known as the “Macbeth” thing from the third season of Blackadder (with nods to the weird symptoms of the Pimpernel’s suicide-pill in the same series)]. It’s so… look, you can do that on screen with funny actors, if it’s really well written and set-up [‘Macbeth’ works because it’s a relative brief and simple thing that becomes funny through repetition, while ‘suicide pill’ works (less well) because it’s thoroughly integrated into the action of a key scene]. Having it on paper out of the blue is so… gods. Is this a novel, or is it a book of funny things Pterry saw on TV once? It could perhaps be salvaged if there were either a great comedic punchline or an unexpected dramatic consequence (what you’d typically do is set up this weird routine as a throwaway gag, and then have it return at a key moment where either it becomes plot-relevent or very funny), but here, though there’s repetition now and then, the other shoe never drops.

Mostly, though, there’s just an objectionable feeling that these aren’t characters following a plot, they’re marionettes to act out whatever skit Pratchett has seen recently and wants to repeat.

Oh, and that’s not to mention the, almost literally, four whole pages of fat-shaming jokes about a villainess (she’s fat and ugly, get it? Hilarious). Pratchett has always enjoyed physical caricature, and he mostly gets away with it in part because he’s fairly nondiscriminatory in his targets (there are fat jokes, but also jokes about thin people, short people, tall people, old people, young people, etc), and in part because there’s usually an undercurrent of affection to the humour (most obviously, Agnes is the butt of lots and lots of fat-shaming jokes in multiple novels – but because Agnes is clearly the heroine, and very likeable, and often the one thinking these things, which she knows she probably shouldn’t be thinking, it’s not so much bullying as wry frankness (more generally, Pratchett gets away with saying a lot, particularly about women, because he’s able to create the impression of being ‘one of the girls’ – things he couldn’t get away with if he were less obviously ‘allied’)). In this case, however, the venom and extremity of it is honestly distasteful. I don’t think it’s because he had any serious personal animosity toward overweight women… it’s just, he’s at a point here where he’s getting really lazy, and a lazy comedian often goes for the broadest, most obvious jokes without thinking about whether he’s being respectful to his audience.

Much the same lack of effort appears in his plotting in this novel. It’s not that it’s bad plotting – there are the appropriate twists and turns – but it all feels extremely by-the-book, with few original touches. No surprise, perhaps, after thirty five novels in the same setting, but an author struggling to rediscover originality should probably not set out to write a book so similar to its predecessor as this. I commented in my review for Going Postal that there’s a sad trend in late Discworld where Pratchett seemed to pick an idea – here, the mint, and central banking* – and “write a Discworld novel about it” – and this is an even better example of that than Going Postal was. He’s taken his themes, his stock of characters (even the ones we haven’t met before are stock characters), and his algorithms for producing A Discworld Plot, and run everything through the computer and this is what got spat out.

Similarly, there’s not a lot on offer here from fans of characterisation. Moist is still Moist, and although his voice does feel a little more lived-in, more authentic here, it has not advanced either beyond the characterisation of the previous novel or beyond the easy clichés that the character is founded in. Adorabelle ought to have more time to shine here, but instead she’s shunted to the background for much of what earlier in Pratchett’s career would probably have been her novel, and when she does move onto the stage she’s no less a spunky, smoke-puffing paperthin trope than she was last time out. Malvolio Bent gets a classic Pratchett name and a moderately satisfying red herring, but not much else (his ground thoroughly covered in earlier novels); Cosmo is a silly, repetitive punchline but at least a vaguely amusing one. The other handful of new characters are so interchangeable that I can’t remember their names, and the couple of other recurring characters are generally served somewhere between “badly” (is that the last time we ever see Angua? I will be so pissed off…) and “blandly”, although Sacharissa raises a smile (if only because putting her in a novel alongside her successo Adorabelle at least makes Sacharissa suddenly appear a nuanced love interest by comparison…). As I said of Going Postal, there’s a weird feeling that Ankh-Morpork has a population of around ten people in three locations – a far cry from the urban sprawl of novels like Night Watch. 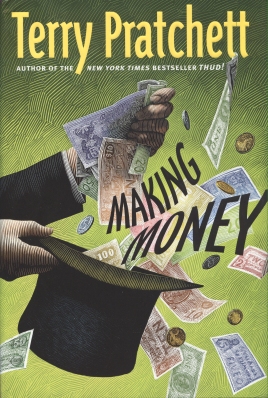 But all that said, this isn’t really a bad book as such. It’s a slack and uninspired one, and a superfluous one, but it isn’t bad. Among the bad jokes, there are still good ones. The plot is interesting enough, and the action brisk enough, to make it an entertaining read, particularly because, as noted, the protagonist feels more comfortable in his own literary skin this time around. Fans of Pratchett’s style will find this a straightforward, easy outing – albeit without the polish of its immediate predecessor, or the genius of some other entries. As Going Postal is often cited (not wholly unfairly) as an entry book, Making Money will be a very early entry for many new fans, and that’s probably not a bad thing (my oldfashioned grumpiness about chronology and spoilers notwithstanding) – it’s accessible, does not rely all that heavily on previous novels, and probably reads as much fresher if you haven’t read the 35 novels that came before. It is, to be fair, a more accurate and generally superior introduction than some of the earliest Discworlds were

In particular, if anyone is unsure whether to skip this installment: don’t. It’s pleasant enough as a whole, and it really springs thrillingly into life – comedically if not narratively – in the Unseen University section, where suddenly the gears run smoothly and Pratchett’s sense of comic timing returns. As in some previous entries, we see again that even when he’s not on good form, the wizards are the one thing Pratchett can’t get wrong.* While the couple of scenes there are probably not worth the cost of the book, they’re certainly worth the cost of reading it if you can find a copy.

*unfortunately the next book in Unseen Academicals, which rather disproves that theory… 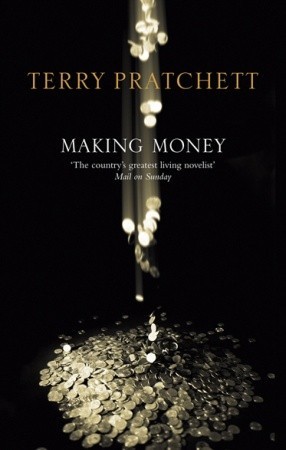 Adrenaline: 2/5. Not without a few interesting set pieces, but an ambling pace and a complete lack of any stakes whatsoever do limit the thrills.

Emotion: 2/5. There are attempts at emotions, but none is given full rein.

Thought: 3/5. Pratchett clearly wanted to Write About Something here. It’s a shame that any points he had to make about the nature of the financial system seemed to have been made better, in a tiny fraction of the wordcount, in Going Postal. That said, there is some intellectual content, and there are some tricks in the plot. You don’t really have to pay attention if you don’t want to, though.

Craft: 3/5. While perfectly competent by other standards, compared to his own best work this is rather too ricketty, with far too many misjudged or poorly explained moments. With some exceptions, he’s largely just doing enough here.

Endearingness: 3/5. I knew, going in, that I remembered not much liking this book. It is, in hindsight, actually a much better book than I thought it was – but I still don’t much like it. The ratio of bits that irritated or bored me to bits that amused or pleased or excited me was just not that favourable. That said, if I hadn’t read 35 other Discworld novels in the last few years, and if I had to choose between picking up this for a re-read and a whole host of other novels… it’d have to be quite a loveable candidate to be clearly more appealing than this. You can’t go too wrong with Pratchett, and a novel that delivers a handful of good laughs and a generally pleasant time shouldn’t be dismissed out of hand. So… about par, I’d say.

Originality: 2/5. Pratchett does, of course, put his own twist on things, but if you’ve read a handful of his other works, particularly Going Postal, then nothing here will surprise you in the slightest.

OVERALL: 4/7. NOT BAD. Yep, on reflection that seems like a fair assessment to me. That makes this distinctly below average for Pratchett, and probably the worst Discworld book since The Last Continent, nine years earlier. My immediate reaction is to think that that’s a little harsh – this isn’t that bad, surely? But when I look at the book between The Last Continent and this, it’s hard to spot one that would be worse.

But that’s not so much an indictment of this book, and more a reflection of just how great Pratchett was for ten years – ten years in which he wrote a few classics, and a whole load of very solid novels. Looking at Discworld as a whole, Making Money is not one of the worst, and compares favourably with some of the less reliable early entries. I haven’t rated a single one of the Discworld novels yet as actually “bad” per se, and Making Money comes closer to ‘good’ than to ‘bad’. It is, in other words, unremarkably “not bad”. And by the standards of novelists who aren’t Terry Pratchett, “not bad” is, in my scales, not a bad place for a novel to sit.

Edit: I’ve just had the thing with the monopoly pieces pointed out to me. It doesn’t materially change my perception of the book, but… well, *tilts hat*, chapeau, Sir Pterry, no pun intended.