I was distracted from writing this review at the time I actually read the book, so this will be brief…

When I was young, some of my favourite books were by Enid Blyton. Oh sure, my favourite book was The Lord of the Rings. But aside from that, Enid Blyton was high on the list. I never read Noddy; I think I only ever read one Secret Seven. And most shockingly, I never read any Famous Five at all (though I did once have a very complicated sort of choose-your-own-adventure Famous Five kit with dice and special apparatus).

What I read, and what I adored, were her eight Adventure novels, starting with this, The Island of Adventure.

The format’s pretty predictable – small group of precocious children get into trouble while uncovering smuggling rings. But the emphasis here is less on the detection and more on the adventure. [This was never my favourite installment – that was the trapped-in-a-valley-after-a-planecrash The Valley of Adventure, possibly the most beloved book of my childhood]

I honestly didn’t know what I’d find, re-reading this novel for the first time in at least 15, if not 20 or more years. Blyton is, after all, an author about whom the current debate is whether to mock her or despise her.

What I found was… jolly decent, actually. The characters are simplistic, but vivid and well-conveyed. The plot still manages to excite the hindbrain – who doesn’t love a good secret passageway!? – and while the language is dated, it’s not (most of the time) ridiculous. In that respect, it’s still readable for today’s children, if they’re merciful.

It’s true, of course, that times have changed for the better, in many ways. The lives of these children are by modern standards horrific, and every interaction they have with an adult should be accompanied by screaming warning sirens – there isn’t the smallest moment that isn’t either abusive or neglectful, or both. That, of course, has always been part of its appeal – underdogs appeal to us, and making your heroes into Dickensian orphans goes a long way. In fact, the grimdark is so intense, I don’t think Dickens would have allowed it.

Lucy-Ann and Jack are orphans. Philip and Dinah aren’t orphans, only half-orphans – their father is dead, and their mother sends them to stay with various strangers and relatives, because she’s a Modern Woman who has a job as an advertising executive of some kind. For most of this story, they’re staying with their aunt and creepy uncle; the house is literally falling down, they can’t afford glass windows so it rains in their bedrooms (I can’t imagine the mold…), and they’re so poor they can only afford one black servant. Lucy-Ann and Jack run away to live with Philip and Dinah – their evil relatives have paid a teacher to let them live with him for a while, but anything’s better than putting up with the kids, so he happily sends the check on to Philip and Dinah’s relatives. In the end, Jack and Lucy-Ann are allowed to stay because Jack’s pet parot is the only living being that’s ever expressed compassion for Dinah’s aunt, who is having a mental breakdown. Dinah and Philip physically fight one another, to the extent of punching each other, while Lucy-Ann is disturbingly, jealously fixated on her older brother. Refreshingly, however, Blyton acknowledges just how nightmarish this all is, and there’s a definite edge of brittle trauma to many of the characters.

But don’t worry, it’s not long before the children have found a nice man who gives them presents and plays with them and demands that they keep all this their little secret and never tell their parents (and/or neglectful relatives) about them. “Golly,” exclaims one of the kids, “he’s going to lick us!”

…so, SO many safeguarding issues.

On the positive side, for modern adult reader the grimdarkness of the era both is hilarious and adds an element of genuine pathos. There’s probably also a useful didactic function here – if you read this to your child, you’ll have so much to discuss with them in terms of what not to do, and when to contact the authorities… 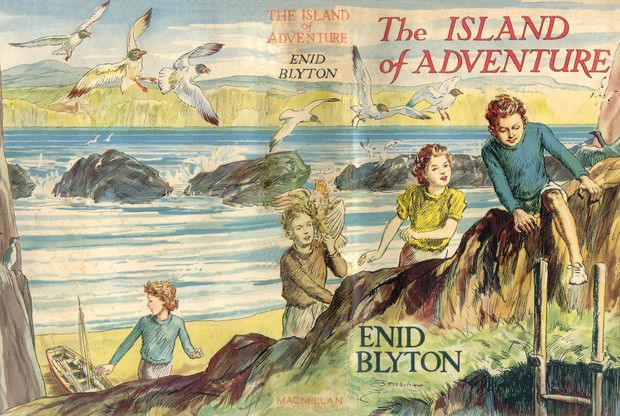 Then there’s the gender politics. It… well. It’s true, the 1940s attitudes are strong here – particularly, interestingly, among the children. “She’s just wasted as a business woman, I think“, one child says to another at one point. “She’s a mother, and she ought to live like a mother, and have a nice home of her own“. At another point, one of the boys thinks to himself: “If I were a girl, I bet I’d burst into tears… But as I’m a boy, I must just grin and bear it.” And yet, perhaps we shouldn’t condemn too quickly. It’s not clear that Blyton ever really endorses these views – it’s pointed out, for instance, that the boy being all macho is “feeling something suspiciously like tears” at the time. It’s true that in this book it’s the boys who are mostly into doing physically stupidly dangerous things, while the girls think the boys are idiots, but it doesn’t feel as though this is inevitable, or ‘correct’. Dinah is the most aggressive and practical of the four, and Lucy-Ann’s weakness is depicted more as a result of her being the youngest than of her being a girl. It feels more like a realistic (perhaps even somewhat progressive/feminist) depiction of four children in the 1940s than some sort of treatise defending conservative values.

Where we should condemn the book, however, is its horrific racism. Indeed, the racism is fascinating! On the surface, it’s a textbook example of surreptitious racism – the black servant, Jo-jo, is not overtly insulted by the narrator on account of his skin colour. But he is constantly refered to as ‘the black man’, drawing attention to his skin colour multiple times a paragraph for no clear reason. He’s given adjectives, too, which by themselves are not so terrible yet which form a clear and familiar pattern: the sulky black man, the sullen black man, the angry black man. His physicality is emphasised in a way that isn’t true of any other character: as the sullen black man threatens to chase, imprison or beat the children (that’s not racist, that’s what all adults do to all children in this world), we have repeated mentions of “the big powerful body of the black man” and the like. He’s continually rolling his eyeballs. He’s also, frankly, stupid.

And yet! There is a second layer here. I think Blyton actually thought she was being clever – in a way that perhaps redeems her just a little, while condemning her society even more. See, and this is a SPOILER, but… Jo-jo’s not actually slow-witted, or at least no more so than any lower-class person (this being the 1940s). People just assume he is because he’s black. He’s not insanely superstitious and terrified of evil spirits – he just pretends to be, and everyone assumes that’s true because he’s black. And he’s not really congenitally sulky – he has a rational reason for acting that way. Blyton, I think, believes that all this is an effective twist – because she thinks that shes skillfully set Jojo up to be a villain, and that her readers won’t realise this because we’ll all assume he’s just a normal, stupid, sulky black person. Ha, she seems to say, you were just being racist!

…of course, “you all assumed he was stupid because he was black, but actually he’s not, he’s evil!” is… not the most enlightened, positive, way to subvert stereotypes. And what might have been subverting a stereotype in 1940 is more like reintroducing a stereotype when read in 2018. So while it maybe ends up less mindlessly racist than it at first appears, it’s still pretty racist, in effect if not in intent.

All that said, despite the somewhat racist plot thread and occasional bursts of 1940s gender attitudes, the novel is actually less horribly morally dated than I feared it might be – it’s not “make sure your children never read this” old-fashioned, just “maybe talk about how times have changed” old-fashioned. 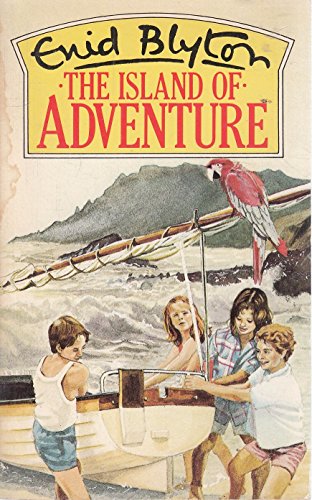 That, I think, is pretty well in keeping with my experience of the book as a whole. No, of course it isn’t as good as I might have thought it when I was a child – it’s a children’s book, it’s inevitably a little superficial. Yes, it is rather old-fashioned in the modern world. But actually: it was much better than I thought it was going to be. It was more exciting than I expected, with a plot that, while not too complicated for children, was decently twisty; it was much more psychologically convincing and interesting than I expected. It was less antediluvian than I expected.

I’m not going to try to give individual scores here, it being too long since I read it, but overall… OK, no, the racism is a problem. But even so, I’d call it solidly Bad, but with redeeming features. Take out Jo-jo and it would be ‘not bad’. There’s certainly still something to like here, even for modern and adult readers, and I think I’m probably going to re-read through the whole series, if only out of nostalgia. I don’t feel any need to rush, however…

NOTA BENE: modern editors have apparently replaced Jo-jo with plain Joe. I’m not in general a fan of censoring old books to match modern morality – and of course there’s also arguments to be made about the value of having memorable black characters with agency, in a book series that’s otherwise as vanilla white as you’d expect from the author’s location in space and time. In this case, however, I think, given that Jo-jo’s race and how it is depicted is entirely irrelevant to the story itself, and very easily rewritten, but a massive and unpleasant distraction for modern readers, and given the intended child audience, I think that it’s not only commercially necessary but also artistically entirely justifiable, and I’d like to think – given that Blyton here appears to be merely employing (and even criticising) contemporary stereotypes rather than personally being motivated by racial animus – that actually, if she were alive today, she’d probably make that change herself.

[It could be argued, probably correctly, that the more authentic and mature thing to have done would have been to have left Joe as Jo-jo, left him as black, and left him as the villain, but simply de-fetishised and modernised his depiction. However, this would have been a fine line to walk, I think – particularly since, in the original, Jo-jo’s self-presentation as a racist caricature is actually a minor plot point – and would also have required, paradoxically, a more substantial and invasive rewriting of the book, and I think it’s very understandable that the publishers have taken the less controversial and more straightforward course.]

So if you’re thinking of giving this to a child to read – and, while that might require either a sensible child or some parental supervision and discussion, that’s honestly not a ridiculous idea – you might want to get a more modern edition that incorporates this change, since by changing a dozen or two sentences throughout the book the publishers have made the text much less problematic without having any real negative impact on the story.

One thought on “Island of Adventure, by Enid Blyton”